Antoine Griezmann spent five seasons at Atlético Madrid before he moved to Barcelona in 2019 in a deal worth €120m.

The forward established himself as one of the biggest stars in world football with Atlético and all of that could have been missed, if Tottenham Hotspur decided to spend an additional €7m to secure his services.

He came through the ranks of Real Sociedad’s academy before being promoted to their first team in 2009.

The France international’s form for La Real convinced Spurs to make an offer, and this has been confirmed by the 30-year-old’s former mentor and representative, Eric Olhats.

Griezmann had a €30m release clause in his contract at Real Sociedad and the north London club’s failure to meet this price allowed Diego Simeone’s side to complete the World Cup winner’s signing in 2014. 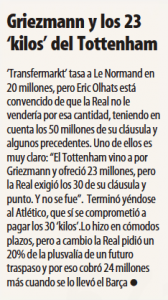 “Tottenham came for Griezmann and offered 23 million, but Real [Sociedad] demanded the 30 of his release clause, period. And he did not go away,” Olhats was quoted as saying by Mundo Deportivo.

Atlético decided to pay the €30m fee demanded by La Real and as part of the agreement, Real Sociedad asked for 20 percent of the future transfer fee, which they received when Los Rojiblancos sold Griezmann to Barca in 2019.