Home Europe Tottenham losing interest in signing despite efforts – Player may have some...
SHARE

Tottenham Hotspur have, perhaps innocently, managed to cause complete chaos at Real Sociedad and PSV over the past week.

A few days ago Willian Jose asked to be left out of consideration for La Real’s match against Espanyol, and he didn’t play on Sunday against Mallorca either.

Marca report Spurs are losing interest in the signing, with it being complicated to complete. They had an offer rejected last week, and given Real Sociedad have to give a chunk to a group connected to the player’s agents, they don’t want to give too much of a discount.

The Spanish newspaper explain that in Willian Jose’s absence, Alexander Isak has managed to impress, with the 20 year old Swedish forward scoring in both of the past two games. 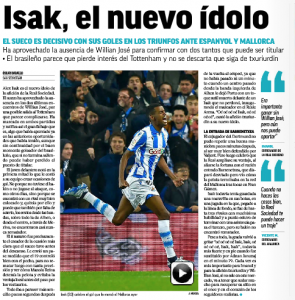 Isak’s side beat Mallorca 3-0 on Sunday, and they certainly didn’t seem to be missing their Brazilian striker.

Should this one fall to pieces, which seems entirely possible at this stage, then Willian Jose will have some grovelling to do at the Basque club, and he made find that Isak, the club’s ‘new idol’, is now more important.