Portuguese side Benfica are already full of offers to sell their players in the summer, according to the local press today.

Newspaper Correio da Manhã brings a story saying these bids could give the Eagles a total of €300m, as they’ve been made for multiple players.

Alex Grimaldo, Ruben Dias, João Félix, Gedson Fernandes, Florentino, Ferro and Jota are the guys who president Luís Felipe Vieira has offers for. The club can also make millions if Wolverhampton Wanderers and Eintracht Frankfurt use their buying options for the transfers of Raul Jimenez and Luka Jovic.

Correio da Manhã names the clubs who have made the bids. They would be Juventus, Atletico Madrid, PSG, Bayern Munich, Borussia Dortmund, Liverpool, Tottenham, Manchester City, Lyon and Monaco. 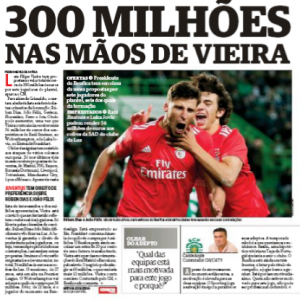 It’s not specified for which player the clubs have made their offers.

Manchester City’s chase for Alex Grimaldo has been reported for a long time now, and Tottenham Hotspur have been said to be following Jota in the past few weeks.

Liverpool haven’t been strongly linked with any Benfica players recently.

Interestingly, Manchester United, who are said to be interested in João Félix and Ruben Dias, are not named in the story.