Without a club after leaving Genoa over the summer, Giuseppe Rossi is currently training with Manchester United at Carrington.

Spending three years of his career between 2004-2007 with the Red Devils where he played with Ole Gunnar Solskjaer, the 29 times capped Italy international is now looking for another club, and Tuttosport believe he could end up at Tottenham.

Rossi is said to have been approached by Spurs ‘over the past few hours’, as the London club face a crisis in attack.

Losing Harry Kane to ligament damage for the next month or so, while Son Heung-min heads off to the Asian Cup, Mauricio Pochettino is left with Fernando Llorente (close to returning to Athletic Bilbao) and Vincent Janssen to help his side score goals. 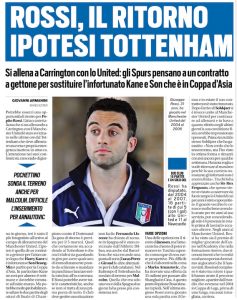 Tottenham’s idea here would be a pay-as-you-play contract for the 31-year-old (who has a very, very long list of injuries behind him) whose profile ‘could have all the characteristics’ needed to fill the gap.

Since his arrival at Carrington, Tuttosport claim Rossi’s physical condition has ‘impressed’ those present, including Solskjaer himself, which could allay fitness fears for Tottenham.

Look, it may sound crazy, and we won’t fully believe it until we see it, but it’s a relatively risk free option for Spurs, who are kind of desperate following Kane’s injury.

If he doesn’t play, he won’t cost Tottenham any money, but if he does and he scores, well it’s a win-win for everyone.

Either way, it’s not like he’ll ask for lots of money, because, at this point, it’s fair to say Rossi just wants to play football.