Home Europe Tottenham likely to have set clause for signing – Spurs ‘had made...
SHARE

During the summer transfer window, Tottenham were looking for a striker, just in case Harry Kane was sold to Manchester City.

The England international was Pep Guardiola’s main target to guarantee himself a regular goalscorer, but Spurs stood strong and the Premier League champions were left with a gap they still need to fill.

Covering his back, newly appointed director of football Fabio Paratici targeted two main striker targets, with those being Dusan Vlahovic and Lautaro Martinez.

The two goalscorers will face each other soon with Inter vs Fiorentina coming up, and Gazzetta dello Sport look at how their futures could have been very different.

They point out Tottenham and Atlético Madrid ‘had made up their minds to take one of the two’, but both clubs put a ‘wall up’ to ensure their stars stayed.

Now, Fiorentina and Inter are trying to tie down their players, with Vlahovic the more reluctant. 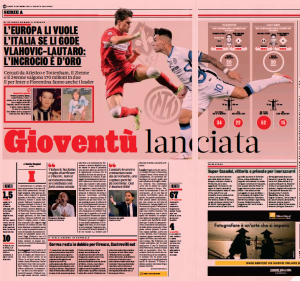 Currently earning under €1m/year, Gazzetta point out he is ‘thinking of a figure around four times higher, but with the inclusion of an €80m clause’.

That would allow Tottenham to plan ahead financially, as it seems almost inevitable that Kane will leave at some point, filling their coffers nicely along the way.

A release clause would facilitate the issue for Spurs and Paratici, and it’s clear that while he agreed to stay at Fiorentina this year, Vlahovic is also aiming for greater things going forward with the inclusion of the clause.

Napoli move into picture to sign Leicester City player – Could...