It seems that Tottenham Hotspur should have a harder job in case they decide to go for the Bosnian striker Luka Jovic this time.

Back in 2015, when he was still a Red Star player, the Serbian media reported that Spurs would be alongside Arsenal in a race for him.

Jovic was still 17 at the time, and maybe Tottenham didn’t make any move, as he ended up being sold to Benfica instead.

The Eagles paid €6.6m to get him, and things didn’t work out as expected, as he ended up making only four appearances for the Lisbon side.

Now that the attacker is spending a season on loan at Eintracht Frankfurt, Tottenham’s interest has been reported again. Calcio Mercato claimed this weekend that Spurs and Chelsea are both keen on the player.

But as reported by A Bola today, Eintracht Frankfurt are keeping him after the loan. The plans were revealed by club director Bruno Hubner in quotes published by the German press this week.

“We have this option and he’ll be an Eintracht player, Hubner said (via A Bola). “The deal is really good for Eintracht”. 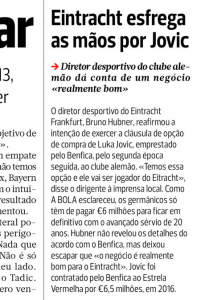 In 10 games for the German side this season, Luka Jovic already has nine goals and one assist. According to A Bola, Eintracht will pay €6m to keep him.

So if Tottenham decide to try again next summer, they will have to negotiate with Eintracht. And Jovic will surely cost a lot more than €6m by then.