Tottenham Hotspur chairman Daniel Levy has a reputation of being a tough negotiator, if a club makes an approach to take his prized assets from Spurs.

The likes of Manchester United and Real Madrid have first hand experience of dealing with the British businessman from the time when the Red Devils and the Spanish capital side signed players from the north London club.

Osvaldo Ardiles is a Tottenham legend, having played for the club 10 years between 1978 and 1988 and he also managed them for one season in the early 90s.

The Argentine gave an interview to AS and he spoke about how difficult it is for interested clubs to get their wish of securing the services of his former club’s stars, especially with Levy at the helm.

“[Levy] is like a defence, a firewall. Here the clubs called to look for players and went back to where they came from. You will know it with Harry Kane, who was wanted by Madrid and where is he playing? That’s it,” the 66-year-old explained.

There were also reported interest from the Champions League winners in making Mauricio Pochettino as Zinedine Zidane’s successor, prior to Julen Lopetegui’s appointment.

Real Madrid’s interest came just days after the former Southampton man signed a new deal and Ardiles stressed that Tottenham have made the best bet on his compatriot. 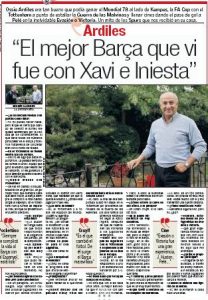 When asked if Spurs are ready for challenges, he said: “Do you doubt it? There’s no doubt that everyone will respond to the demand of the match, the competition. The bet on Pochettino was very strong. The best that Tottenham could do at that moment. We were not wrong.”