Home Europe Tottenham leaning towards loan move for star, would allow them to trigger...
SHARE

On Wednesday, news broke that Tottenham’s Erik Lamela would be out for the remainder of the season as the Argentinean forward underwent surgery to fix his hip injury that has kept him out for most of the campaign.

Earlier this week, Corriere dello Sport went big on the possibility the Spurs inside forward would be a big summer target for Inter Milan, as Stefano Pioli is looking for someone with Lamela’s skills for his right-wing next season.

At the time, the Italian newspaper claimed the player’s season was basically over, which it now is, and that he felt his time at White Hart Lane was coming to an end.

While they made a lot of sense, Corriere also claimed the player would be available for around €10m, which we didn’t believe, and now they’ve changed their tune a little bit. 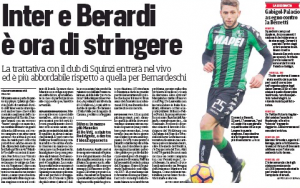 They state in Thursday’s edition that Tottenham would now be open to a loan move for Lamela next season, as this would trigger a one year extension on his current deal.

However, as stated in the previous article, Federico Bernardeschi and Domenico Berardi remain the club’s top priorities as they try and continually Italianise their squad.