Monday’s edition of Sport has an article on the future of Matthijs de Ligt, and Barcelona’s chances of signing the defender.

It’s explained Juventus are looking to sell the Dutchman, due to serious financial issues currently in place at the Turin club. Multiple clubs are interested, and it’s stated Tottenham and Chelsea have ‘launched’ themselves for the signing.

Both London clubs are in a better position than Barcelona, due to difficult finances at the Catalan side, but the Blaugrana aren’t completely ruled out of the race.

The ‘bidding’ for De Ligt has ‘started’, and the insinuation is that clubs are positioning themselves with the player’s agent, Mino Raiola.

Reading between the lines, it would appear Barcelona were informed of Tottenham and Chelsea interest during a recent meeting with Raiola. Whether that means the interest is real, or is part of the agent playing games, isn’t entirely clear. 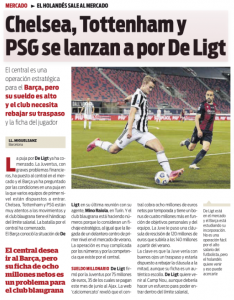 De Ligt certainly hasn’t been a runaway success at Juventus, yet he’s still only 22-years-of-age and has plenty of time to truly fulfil his potential.