Tottenham Hotspur are one of the clubs who had a job to do in Portugal this week.

After watching Benfica’s clash with Lyon for the Champions League on Wednesday, Spurs also scouted the 1-1 draw between Porto and Rangers for the Europa League last night.

It’s newspaper O Jogo who reports the Spurs’ visit to the Estádio do Dragão, although it’s not pointed out who they could be watching.

Tottenham have only been linked to one Porto player in the summer, Diogo Queirós. But the defender left the club on a loan deal, so it’s hard to guess who the scouts had an eye on. 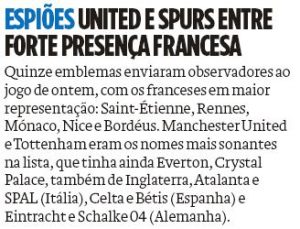 Goalkeeper Agustin Marchesin and defender Pepe had a great performance for the home side, just like Luis Diaz, who scored Porto’s opener. For Rangers, it was Alfredo Morellos who stood out and scored the equaliser.