Tottenham manager José Mourinho has spoken with PSG full-back Thomas Meunier on the phone about a potential move this summer.

The Belgian international is out of contract in Paris this summer and as yet has not been offered a new deal to extend his stay.

He has plenty of suitors and Tottenham are among them, with them having been named as a potential destination by various outlets.

Het Laatste Nieuws confirm their interest today, backing up earlier reports that Mourinho has held talks with Meunier on the phone about a move saying that the player ‘recently received a call’ from the Spurs boss. 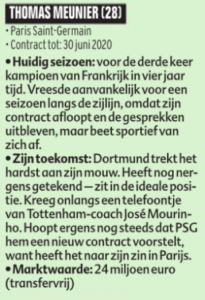 As yet the Belgian hasn’t made a decision about his future, but the newspaper say he is in the ‘ideal position’ to choose his next destination should he be leaving PSG.

Tottenham are not the only ones interested, in fact, Borussia Dortmund have ‘pulled up his sleeve’ the hardest at this moment in time.

For now, he’s hoping that PSG will offer him a new contract because he’s having a ‘great time’ in Paris and wants to stay there.