Home Europe ‘Mourinho has phoned him personally’ – Tottenham an option as transfer to...
SHARE

Tottenham Hotspur are one of the sides interested Sergio Reguilón, according to AS.

The left-back’s impressive loan spell at Sevilla wasn’t enough to convince Zinedine Zidane, which is why the 23-year-old’s future will be away from Real Madrid.

It’s claimed the La Liga giants are planning to cash in from the defender’s sale this summer, provided a buyback option is included as part of the deal.

As per the claims, the Premier League ‘awaits’ the Spain international, where Spurs, Manchester United and Chelsea are interested in him.

With regards to the north London club, Tottenham are on the ‘lookout’ for Reguilón and José Mourinho has taken an interest in the defender.

The report states ‘Mourinho has phoned him personally’. 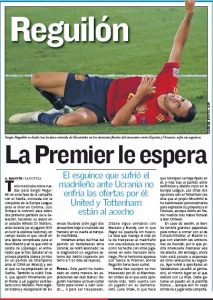 Any possibility of moving to Stamford Bridge has reduced for Reguilón after the Blues signed Ben Chilwell from Leicester City last month.

The newspaper only states Tottenham are interested in the player and Mourinho is personally trying to persuade him to join his side.

AS, however, don’t mention if Reguilón would prefer a move to Spurs over other clubs.