Christian Eriksen has a year left on his contract at Tottenham Hotspur and his future at the club remains uncertain.

The Champions League runners-up are looking for potential replacement for the Denmark international and Real Betis star Giovani Lo Celso has been identified as one of the targets.

Spurs may get some help from Borja Iglesias in signing the Argentine international, according to Catalan newspaper Sport, who claims that new Betis manager Rubi has set his sights on landing the Espanyol striker.

Rubi spent one season with the Catalan club and in his only summer transfer window in 2018, he signed Borja. The manager left Espanyol and was recently took charge at Betis.

Borja has a release clause of €28m in his contract with his current employer and Betis will not have any issue in paying his asking price.

Sport explains Rubi’s new side are planning to raise funds by cashing in on Lo Celso’s potential sale in the summer and it is once again mention that Mauricio Pochettino’s side are ‘interested’ in the South American.

This is backed up by other claims in Spain which state Betis have been trying to convince Espanyol to accept instalments, suggesting their don’t have the funds to pay the amount in one go.

Though Lo Celso has a release clause of €100m, Betis are willing to listen to offers starting from €60m. 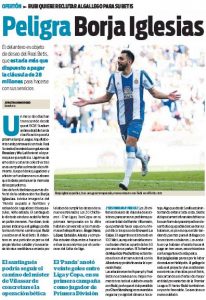 With Betis keen on signing Borja, they could allow Lo Celso leave the club and it remains to be seen if the English side are ready to submit an improved offer for the former PSG man.