Despite what felt like a long search in January for a new striker, Tottenham never came up with an adequate name to help in Harry Kane’s absence.

They still don’t really have a player naturally capable of taking over like they did with Fernando Llorente, and it’s something they will need in case the England international succumbs to injury again.

That’s why links to players such as Arkadiusz Milik make sense, but the Pole isn’t the only one, as AS Roma’s Patrik Schick is also of interest to Spurs.

This is according to Il Tempo on Thursday, who explain both Arsenal and Tottenham are keen on the 24-year-old, currently on loan at RB Leipzig.

Scoring on Wednesday night against Hertha Berlin, the Czech goalscorer has a clause in his loan deal worth €29m, which the Bundesliga side aren’t prepared to trigger at the moment. 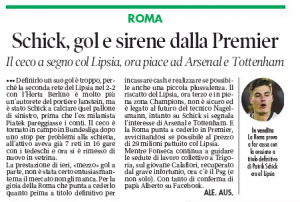 This has caused Roma to look elsewhere to get the money they want for Schick, and where better to go than the Premier League?

Il Tempo explain the Serie A side are now looking at clubs in England’s first-tier for a sale, and will try to ‘get as close as possible’ to the €29m price tag they have placed on him.

Versatile and capable when in form, Schick has the technical attributes to thrive on this side of the Channel, but whether playing second fiddle to Kane is what’s best for his career at this point remains to be seen.