With the English press this week writing about Darwin Nunez, we today get to see all Portuguese newspapers covering the claims about the race for the 22-year-old.

And even though Tottenham Hotspur were not named by the British media as one of the main contenders for this signing, an interesting mention to their chase is made by Lisbon newspaper A Bola.

After pointing out the clubs whose pursuit were reported by the Athletic this week, the outlet then makes sure to include Spurs in the list of interested sides.

The newspaper says Tottenham are interested in Darwin Nunez since the time the striker played for Almeria back in 2019, and with his success at Benfica, the London club continue to follow him. 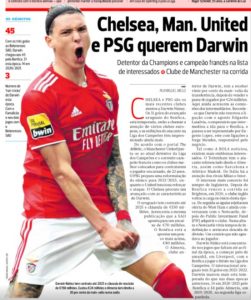 Darwin Nunez has 31 goals scored for Benfica this season, and given the long list of interested clubs and the fact he’s protected by a €150m release clause, the Eagles are full of arguments to demand a big fee for his sale.

That’s why, according to A Bola, the Lisbon side will ask for over €80m to let him go.

Besides Tottenham, the likes of Chelsea, Manchester United, Atletico Madrid, Barcelona, Paris Saint Germain, Inter Milan and Milan are all in the hunt for him as well.