We certainly didn’t, but many scouts around Europe know who he is, as the 16-year-old starts to make a name for himself playing for the PAOK Komotini Academy.

Tottenham are among those taking an interest in the young number ten, described by Corriere dello Sport as being able to play with both feet and capable of featuring a bit deeper as a mezzala.

He managed to score 24 goals and assist another 30 last season in the Greek youth leagues, showcasing exactly why Spurs, joined by the likes of Lazio and Ajax, are sniffing around.

There is one team who may have an advantage, and it’s not José Mourinho’s side, as the youngster ‘dreams’ of Italy. 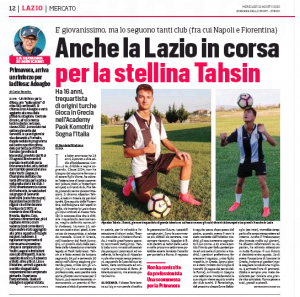 It’s said Lazio could make their move to bring him to Rome in the ‘next few weeks’, wanting to beat the competition as quickly as possible.

Tohsin has previously been in contact with the likes of Atlético Madrid and Sevilla, whereas Turkish sides such as Fenerbahçe and Trabzonspor are also lurking.

That means there’s a lot of fighting to do for Daniel Levy and his transfer men, and with Lazio seemingly having an advantage, time could be running out quickly.