The past few days have seen a surge in claims from Italy regarding Tottenham’s interest in Nicolo Zaniolo.

The Roma youngster took Europe by storm this season after being thrown in at the deep end by Eusebio di Francesco, which has led to all the big clubs taking an interest in what the 19-year-old has to offer.

Il Messaggero are no different on Wednesday, explaining Spurs remain keen on Zaniolo (without giving any new detail), although he isn’t the only one they want from the Rome based club.

According to the Italian newspaper, Tottenham are also interested in Lorenzo Pellegrini, who has been in and out of the squad this season with some muscular issues, but remains an important cog in the Roma machine when fully fit. 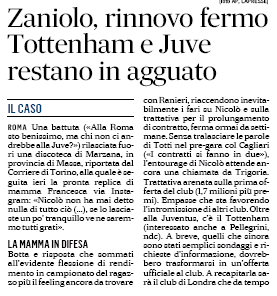 The 22-year-old is also the proud owner of a €30m release clause, payable in two €15m instalments, which will become active in the summer.

With a need for squad depth at Tottenham after two barren transfer windows, it isn’t surprising to see Mauricio Pochettino taking a closer looking at a player capable of playing anywhere from defensive midfield to attacking midfielder.

He also fits the club’s philosophy of not going too crazy with their spending thanks to that release clause.

One to certainly keep an eye on.