Home Europe Tottenham interest in player backed up by second source, watched him against...
SHARE

Tottenham Hotspur and Bayer Munich’s chase for the Benfica youngster Jota is becoming a real deal in the Portuguese press.

Newspaper A Bola now has a story saying the two clubs ‘continue to see’ the player, who featured for Portugal’s U20 team against England on Tuesday.

The insinuation is that Tottenham and Bayern had scouts at the match, although that’s not stated explicitly.

Last week, a story from Record said Spurs would be following Jota in this game, but not from the stands. This is a strange thing to be reported, but it looks like A Bola’s article could side with that. 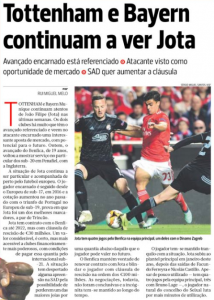 A Bola says Jota is currently protected by a €30m release clause, which is obviously affordable for big clubs. That’s why Benfica are in a hurry to give him a new contract and protect him with a €100m clause. But things haven’t been advancing lately.

Last week, the Italian press tried to cover the Portuguese rumour, but ended up linking Tottenham to Diogo Jota from Wolverhampton Wanderers.

This, inevitably, ended up all over the English media. So it’s worth recalling these are very different Jotas.