Tottenham are showing ‘concrete’ interest in Juventus midfielder Weston McKennie, but need to convince the Italians into a loan deal.

That’s according to Gazzetta Dello Sport and Corriere Dello Sport who both say Spurs continue to push to sign the American midfielder.

McKennie has been linked with a move away from Juventus over the past few weeks, with it believed they are happy to let him go to sign someone who better fits Max Allegri’s system.

Tottenham have been named as suitors courtesy of director of football Fabio Paratici, who signed McKennie for Juventus during his time in charge.

Allegri has stated publicly he would like to keep the midfielder, but according to both Gazzetta and Corriere, Tottenham are pushing regardless.

Gazzetta state that their interest is ‘concrete’, with Paratici interested in a loan deal and, above all, an exchange. The latter, however, has been thwarted by Juventus’ lack of interest in Moussa Sissoko or Tanguy Ndombelé. 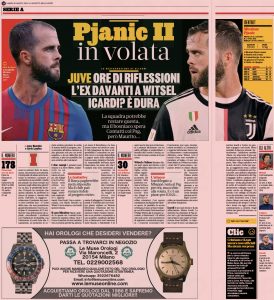 They explain that Juventus aren’t interested in a loan deal as that would see them lose the benefits of Decreto Crescita, which sees McKennie only taxed on 50% of his income, which is naturally beneficial for Juventus and their accounts.

Corriere, meanwhile, say Tottenham are ‘still thinking’ about a move and ‘continue to press’ for his signature.

They say that Juve would like to earn at least €30m from a sale after paying €18.5m for him last March, a deal which also includes €6.5m in possible bonuses.

He is the only possible exit on the cards at the Italian giants at this moment in time, although there is no suggestion that Tottenham would be willing to pay what they’re asking for.

Gazzetta suggest that isn’t the case, so there’s work for Paratici to be done before the transfer window shuts.