Abdoulaye Doucoure has been speaking to L’Equipe this weekend, as the Watford player’s profile continues to grow.

The 25 year old has been talking up interest in himself in recent weeks, although this time he left it to L’Equipe to state which clubs are keen.

Arsenal and Tottenham are the clubs mentioned by the well connected French newspaper, and it’s Mauricio Pochettino’s side who had been the most frequently linked.

The two Premier League clubs are said to be ‘forcing’ for Doucoure’s signing, whilst Watford themselves are trying to get a renewal offer together and keep the midfielder around beyond the end of the season.

Asked about a move and the interest in him, Doucoure explained: “I’m coming to an important stage.

“It is a pleasure to see that big clubs are interested in me. We will make it an issue at the end of the season and we will ask the right questions.”

That’s at the very least a hint about a potential transfer, and Doucoure’s wider words will give some hope to Tottenham and other interested clubs, and provide worry for Watford.

The footballer seems to feel he’s missed out by being injured for the U20 World Cup in 2013, seeing others win the tournament and it giving a boost to their careers.

Asked if that setback was his first big career regret, the Watford player said: “Yes, because I knew we could win it. And the Blues have won… This has opened a lot of doors 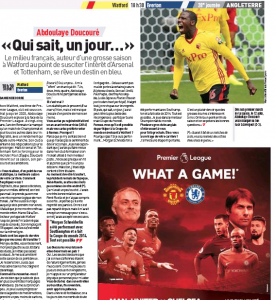 for some players. Nevertheless, I do not live on regrets. And then, who knows, one day, I will have perhaps the most beautiful of the rewards: to participate in a real World Cup.”

The Tottenham target hasn’t completely given up on participating in this year’s World Cup, but it would be a long shot at this stage.

Seeing some of his old U20 French teammates (such as Pogba, Umtiti, Digne, Thauvin, and Kondogbia) go on to big clubs, full national recognition and European football, Doucoure feels he’s missed out somewhat.