On November 12th, TuttoMercatoWeb explained Tottenham Hotspur are considered a ‘credible candidate’ in the race to sign Dejan Kulusevski.

The winger is struggling for regular game time at Juventus and remains open to changing clubs, if his situation doesn’t improve at the Serie A side.

Saturday’s edition of Tuttosport states Juve are keen to sign Dušan Vlahović in the winter market, but will need at least €50-60m to convince Fiorentina.

The Old Lady plan to raise funds by offloading some of their players and the former Atalanta man is among the candidates.

It’s claimed Tottenham chief Fabio Paratici, who brought him to Juventus, is ‘interested’ in the Sweden international. His esteem towards the player is still strong, which is also shared by the new manager, Antonio Conte.

A fierce competition is expected to sign Kulusevski, but Tuttosport say Spurs are ‘in the first place’. 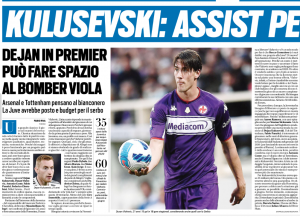 Having invested €35m on the Swede’s signing, the report states Juve hope to get at least €40m from his sale in January.

Tottenham’s interest in Kulusevski is driven by Conte and Paratici. Time will tell whether or not they will invest around €40m to sign the attacker.