Fotomac report Fenerbahce won’t sell Vedat Muriqi unless their valuation of the player is met, with the likes of Tottenham Hotspur, Lazio and Napoli all interested in signing him in the summer.

It’s reported the Turkish club value the Kosovo international in the region of €20m, and they won’t sell the player below that. Interestingly, that’s lower than previous claims, so perhaps they’re starting to get realistic.

The Yellow Canaries will also be looking to bring in a replacement if he leaves, with the likes of Dries Mertens, Edinson Cavani and Chelsea’s Olivier Giroud among the players they are currently looking at.

Muriqi has been linked with a move away from the club throughout the season after his impressive performances for the Turkish side. This has brought him to the attention of Tottenham, who have been linked with the player for the past few months.

Earlier in the season there were reports Spurs had been sending scouts to watch Muriqi but an offer never came in during the last window. 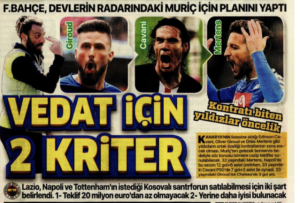 Muriqi joined Fener from Rizespor for €3.5m at the start of the season and has scored 15 goals in all competitions.

His contract with the Super Lig side will expire at the end of June 2023.