Home Europe Tottenham Hotspur have ‘put €50m on the table’, Spurs serious in the...
SHARE

The Catalan media seem to be keen to talk up something of a European transfer war for the signatures of Ajax pair Matthijs de Ligt and Frenkie de Jong.

They’ve been upping the hype for weeks now, with various front pages claiming transfer wars and other clubs trying to get ahead of Barcelona with big offers.

It feels forced, an attempt to present a situation which may not really exist, and Tottenham Hotspur are part of it. The punchline to all the stories is that, whoever else is keen, the players want Barca… which is how it always is for the Catalan media.

Last week it was reported Tottenham have a trick up their sleeve in Davinson Sanchez, who could convince De Ligt that a move to Spurs would be the best choice. A day later the slant was Tottenham’s good relationship with Ajax would also help.

Monday’s edition of Mundo Deportivo claims Mauricio Pochettino’s club have already ‘put €50m on the table’ for De Ligt. They don’t make it clear, but the assumption is this offer was rejected. 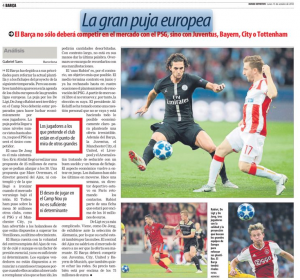 Barcelona will have to compete with such offers, along with other clubs willing to spend €70m and more.

For Tottenham fans, it’s probably best to take everything with a pinch of salt.