Aksam claim Tottenham Hotspur are expected to make an offer for Fenerbahce striker Vedat Muriqi in the January transfer window, but the Turkish side have no intention of selling their star man in the middle of the season.

The Kosovan striker has made an excellent start to the season with Fenerbahce and he scored again at the weekend.

It’s reported by the Turkish newspaper that Muriqi is a target for Mauricio Pochettino and Spurs are watching his performances very closely. Tottenham recently monitored the player during the international break.

However, Fenerbahce don’t want to lose a key player so they aren’t interested in entering discussions as they are targeting the Super Lig title this season. 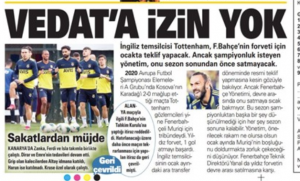 The Kosovan striker’s transfer situation will become much clearer at the end of the season according to Aksam, and both player and club are keen to continue with each other at least until next summer.

Muriqi’s contract with Fenerbahce will expire at the end of June 2023.