Tottenham Hotspur are one of a small number of clubs who are serious option for Julian Brandt this summer, according to Wednesday’s edition of SportBild.

The 23 year old is currently playing for Bayer Leverkusen, having moved there in 2014 from Wolfsburg. He has a contract lasting until June 2021, and there has been talk of a €25m release clause, although that’s not mentioned in this article from the German magazine.

Brandt is a right footer and very flexible in attacking positions, able to play on either as an attacking midfielder across the pitch or on either wing. He’s scored nine goals and made 17 assists so far this season.

SportBild say Tottenham, Borussia Dortmund and Atletico Madrid have all held talks with the player’s father Jurgen. These clubs are considered to be real options for a move this summer.

Torino and PSG have also had a chat with Jurgen Brandt, but they’re now considered to be out of the transfer race.

He would be a good flexible option for Mauricio Pochettino this summer and if the previous €25m claims have been correct, he’d represent good business for Tottenham. 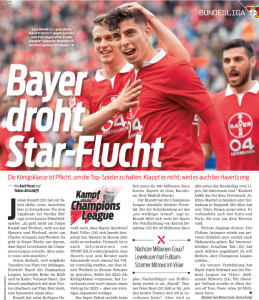 SportBild also talk about the future of Kai Havertz, and it’s explained Leverkusen want to keep the player for another season, although his agent will talk to the club about a possible transfer this summer.