Just a few days ago, it was revealed that Tottenham had started turning their attention to Atalanta’s Cristian Romero.

The Argentine was reportedly the number one name on Nuno Espirito Santo’s list of defenders he wanted to buy to bolster the centre of his back line, and it appeared Fabio Paratici had dropped the Takehiro Tomiyasu deal for now to focus on the Juventus loanee.

The problem, according to Corriere dello Sport, is that Romero doesn’t appear to be interested in moving to Tottenham right now.

The newspaper, when looking at the Tomiyasu deal, explain the Argentina international ‘has let Paratici know that he wants, for now at least, to stay at Atalanta’. 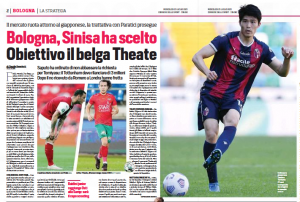 That’s not what the Tottenham director of football would have wanted to hear, and represents a blow for Spurs in their attempts to strengthen their defence going forward, if true.

So, it appears Nuno Espirito Santo and his transfer guru might have to look elsewhere for the time being, with Tomiyasu patiently waiting.