Having previously been linked with West Ham, Antonin Barak could find himself heading towards another destination in London: Tottenham Hotspur.

The news comes from Corriere dello Sport, who have a very short bit of information on the Czech Republic international and his future at Hellas Verona, where he has been excelling this season.

In search of midfield reinforcements, Antonio Conte is looking at Sofyan Amrabat since he can’t get Weston McKennie, but Barak would play a bit more advanced, having scored eight goals and assisted another four in 19 Serie A appearances so far this season.

Corriere explain that Tottenham are ‘gathering information’ on the attacking midfielder, but the club’s president ‘plans to keep him at least until the end of the league’, suggesting a January deal is out of the question. 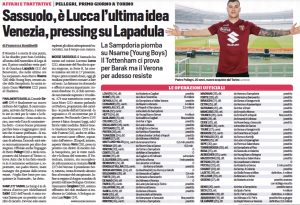 Previous reports, however, back when Newcastle and West Ham were mentioned, suggested a fee of at least €25m might be enough to convince him otherwise, but it remains to be seen if that’s an amount Daniel Levy is willing to part with midway through the season.

As for Barak, it would certainly be a step up, but he would likely need to have assurances of being a regular starter before jumping what is currently a very comfortable ship.