Tanguy Ndombélé’s performance against Barcelona from Tuesday gets a story from Tuttosport this Saturday, as the newspaper names the clubs who are interested in signing the player.

The outlet claims that ‘for obvious geographic reasons’, Paris Saint Germain are one of the sides who have been following the Lyon star, but there are many more to join the auction.

Tuttosport says Tottenham, Arsenal and Barcelona are all in the race as well. But most of the attention goes to Juventus, who have been in contact with the player’s entourage and seem one step ahead of the others.

However, despite these clubs having ‘gathered information’ on the player’s situation, there are no reports of bids this time. Tuttosport can’t even say how much would it cost to take the player from Lyon. 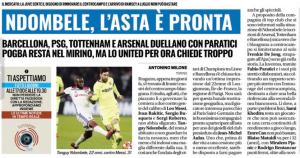 Ndombele has joined Lyon on a €8m move from Amiens last summer, having signed a five-year deal. So it’s safe to say his club could fight to keep him for longer.

Tottenham have been repeatedly linked with the player, yet Arsenal aren’t mentioned so often.