Getting his second start in the league this season in Son Heung-min’s absence, Carlos Vinicius found the back of the net in a 2-0 win over Aston Villa.

Assisted by compatriot Lucas Moura, the Tottenham loanee showed why José Mourinho and his staff decided to bring him in to help out this season, albeit with an expensive €40m purchase clause to go with it.

Whether they trigger that remains to be seen (the latest reports don’t seem to suggest they will), and in case they decide against it, other profiles are being studied, including one also being targeted by West Ham.

Creeping up recently is the name of Dusan Vlahovic, currently contracted to Fiorentina and who has caught the eye with his performances.

While the Serie A side haven’t been great of late, he has still managed to find the back of the net regularly, with the 21-year-old scoring 12 league goals in 27 appearances so far.

That has pricked the scouting ears of a few clubs around Europe, with La Repubblica claiming Borussia Dortmund, West Ham and Tottenham are all among the list of suitors, with ‘whispers’ of Real Madrid also being there. 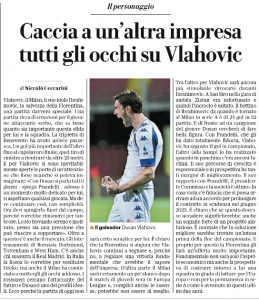 In Italy, AS Roma want him to replace Edin Dzeko, but Milan have taken notes as well.

A long queue for a promising striker, whose contract at Fiorentina runs out in 2023, but the aim is to keep him around for as long as possible.

That’s why La Viola will make him a ‘very important offer’ this summer to see if he’ll commit his future to the club.

As for West Ham and Tottenham, it’ll be up to them to be very convincing if they want Vlahovic, as it’s pretty clear Fiorentina aren’t all that keen to sell.