Tottenham Hotspur have been the main club chasing Giovani Lo Celso this summer, but they have so far failed to meet Real Betis’ €75m asking price.

On August 5th, ABC Sevilla reported the La Liga side are ‘upset’ with Spurs’ attitude in their efforts to sign the 23-year-old.

Mundo Deportivo have once again relayed these claims on Tuesday. Betis are ‘tired’ of the way Tottenham president Daniel Levy has acted so far while negotiating for the Argentina international.

Therefore, the club ‘urges’ Lo Celso’s agent to negotiate with others who have shown interest in his client. This includes Napoli and Atletico Madrid.

The two clubs were chasing James Rodriguez, but the Colombian is likely to stay at Real Madrid after Marco Asensio’s injury. 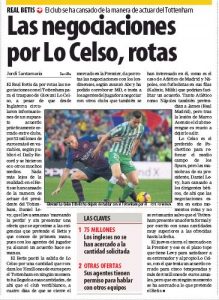 Mundo make it clear that Betis will only resume negotiations with Tottenham if Mauricio Pochettino’s side submit a formal and written proposal, which is higher than the one they have made so far.

It remains to be seen whether or not Spurs will make an improved offer for Lo Celso.