Tottenham and Everton officials were both spotted at Saturday evening’s match between FC Porto and Sporting, report O Jogo in their Sunday edition.

Atletico Madrid were also in attendance, and the Portuguese newspaper says they were looking at Porto’s Alex Telles ahead of a possible summer swoop for the fullback.

Both Spurs and the Toffees have also been linked with the Brazilian, and the next market is looking prime for a move.

The match was Portugal’s Taca da Liga final, the League Cup, and it finished 1-1.

Sporting then won on penalties, a huge boost for the Lisbon club after a very difficult year on and off the pitch. 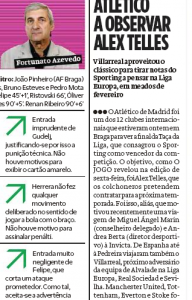 Telles had a good match at left back, and didn’t do much wrong, unable to stop his side losing the cup.

Eder Militao has also been linked with Everton, and he did well, but it’s thought he’s set to join Real Madrid.

The Merseyside club tried to sign Telles in the summer, but couldn’t reach the €40m demanded. Tottenham have been linked repeatedly since 2017.