Portuguese newspaper A Bola today features a story where they name all the clubs who’ve been interested in the signing of Benfica star Darwin Nunez.

And it turns out the outlet has interesting information regarding Tottenham Hotspur, who are now mentioned as a potential destination for the striker this summer.

A Bola writes that Spurs are now ’emerging in strength’ as one of the competitions for his signing, and the big reason for that is the potential departure of Harry Kane.

It’s said the London side are to ‘consider selling’ the English star in the next transfer window, and it turns out that Darwin has been an option for the club for a long time now. 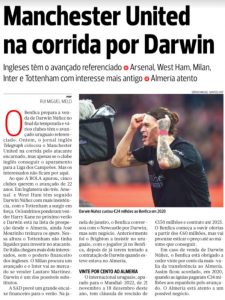 According to A Bola, Tottenham have had the Uruguayan in a ‘prospect list’ since he started  standing out for Almeria.

It was José Mourinho who was in charge of the club at the time, but it’s said the club did not have money to invest in the signing back then.

The striker left Spain to join Benfica on a €24m deal in 2020, and it didn’t take long for him to succeed there, as following his great appearances this season, it’s now believed the Eagles will demand at least €60m for his transfer.

Considering the price and the big competition there will be for Darwin this summer, it does make sense that Tottenham are only going for him in case they really need to replace Harry Kane.