Portuguese newspaper Record have a big article in their Saturday edition on Tottenham and Alex Grimaldo.

The headline reads ‘Tottenham have €30m for Grimaldo’ and it’s then stated ‘With Danny Rose on the way out, Spurs can advance soon for the Spanish fullback’.

Despite the big claims, it feels like speculation based on some previous links (although it doesn’t say that) and Napoli’s attempts to sign the player stalling.

Napoli had been considered close to a summer deal to get Grimaldo from Benfica, with the former Barcelona player seen as their replacement for Faouzi Ghoulam.

With Ghoulam still in Naples and Napoli changing their manager from Maurizio Sarri to Carlo Ancelotti, there’s been no progress on getting the deal done. 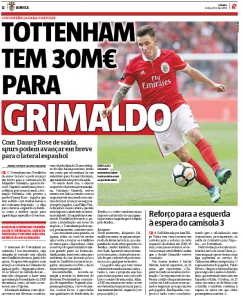 Benfica president Luís Filipe Vieira is said to have made it clear that 22 year old Grimaldo won’t be leaving for less than his €30m clause, and Record clearly believe that’s achievable for Tottenham.

It would feel like the Spurs interest is being talked up here, and there’s no claims of talks taking place recently or even contact being made. Benfica may be looking towards Tottenham, but with Rose they’re in a similar situation to Napoli with Ghoulam.