Just under a week ago, we covered a relatively surprising article stating that Roma, who are in the market for a new centre-back as Kostas Manolas heads to Napoli, had been circling around Tottenham’s Toby Alderweireld.

The Belgian centre-back’s transfer situation is well known, having extended his contract with Spurs by an extra year, in turn activating a £25m release clause that makes him widely available to most big clubs around the continent.

Despite all this nerve-racking news, this all meant nothing if Alderweireld doesn’t want to leave, and he’s said as much, stating he was willing to start the new season at Tottenham.

Gazzetta dello Sport, however, suggest on Monday that someone is trying to get the former Southampton defender out of London, as they report the 30-year-old was ‘offered’ to Roma. 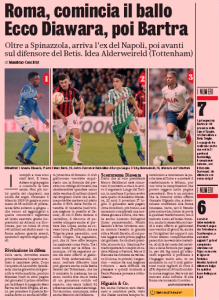 If that is indeed the case, it would explain the surprise news from last week that the Serie A side were asking questions about his situation.

Without this silver platter presentation of his services, few would have pegged Roma as one of the clubs brave enough to try and entice him away from the Premier League, especially without Champions League football next season.

Our first thought when seeing this story in Gazzetta was that an opportunistic intermediary was behind it, which was immediately confirmed by Corriere dello Sport, who explain as much in their Monday edition.