With Antonio Conte wanting to play a back three at Tottenham, more centre-backs will be needed in the future.

One of those, according to the Italian press, could be Gleison Bremer, who is having a fantastic season for Torino this year.

Tottenham have been linked a number of times in the past, although Liverpool seemed to be the favourites from the Premier League of late.

Inter have been touted as his next destination, but with no deal struck, the auction is still open, and Spurs intend to take part.

This comes from Gazzetta dello Sport, who explain that ‘observers from Tottenham and Atlético Madrid have recently landed in Turin’.

Working for Fabio Paratici, they ‘seem to have identified in Bremer many of the characteristics suitable for Conte and Simeone’s football’. 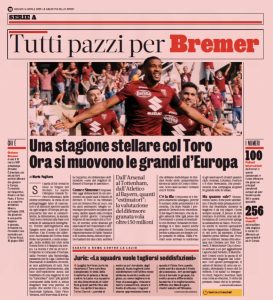 In fact, ‘contacts with Torino have been started’.

The next question is how much is he worth? The answer to that, although there have been claims of him costing as little as €25m, could be quite expensive.

Gazzetta state that his value is ‘certainly flying’, potentially ‘breaking through the €50m mark’.

That’s quite the expense, but if he replicates his Serie A form in the Premier League, it could end up being a bargain for Tottenham.