Despite Tottenham Hotspur’s failed attempt to sign Bruno Fernandes on Thursday, it seems the London club haven’t given up on the signing so easily.

Portuguese newspaper O Jogo has a story about the situation today, claiming that the clubs stayed in ‘constant’ contact during Saturday.

It was Jorge Mendes who was the intermediary between Spurs and the Lions, doing his best for the sides to finally find an agreement for the 24-year-old.

It’s said that Sporting have rejected Tottenham’s offer of €45m upfront plus another €15m in bonuses. But they admit that a total of €70m, including bonuses, could convince them to accept. And the Spurs are open to raising their bid. 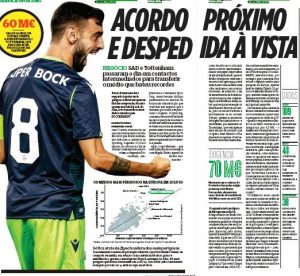 O Jogo says that after the Supertaca tonight, a new bid could be on the table already. Then on Monday, it would be time to make that offer official.

Record is another newspaper who says Tottenham are coming with a new bid. But both them and O Jogo say we should wait and see how Manchester United will move in the next few days. Meanwhile, A Bola and Correio da Manhã both believe the Red Devils are making a strong offer for the midfielder, so Spurs shouldn’t have a clear path for this signing.