Tottenham ‘have their eyes’ on Torino midfielder Saša Lukić ahead of the summer transfer window.

That’s according to Tuttosport, who back up claims that Spurs are eyeing up a move for the 24-year-old Serbian star.

Yesterday we covered a report from Tuttomercatoweb that stated Tottenham were keen on Lukić, who was said to have become ‘hot’ at the club and deemed a ‘perfect target’ for the club.

They were named as an interested party alongside Crystal Palace, and Tuttosport back all of that up today.

The newspaper claims that Tottenham have watched the midfielder ‘for some time’, and thus he is a potential target for Jose Mourinho, who may be looking to improve his midfield for next season.

There is no mention of a bid or anything of that nature; despite the fact Crystal Palace tried to get him in January, just that he is on the club’s list of potential targets. 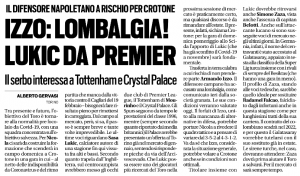 Torino, for their part, are more than aware of the interest in their man, and the fact he will be ‘one of the most sought after’ players at the club in the summer is ‘practically certain’.

They, though, aren’t interested in talking about a transfer as yet, and any talks with interested parties have been ‘postponed to the summer’.