Last summer, we covered claims from France that Tottenham Hotspur were one of the clubs interested in signing Malcom from Bordeaux, and it dated back to the previous January window.

However, it was Barcelona who managed to beat AS Roma in securing the forward’s services. Since making a switch to the Camp Nou, he’s made only two starts in all competitions.

Wednesday’s edition of Catalan newspaper Sport has a short story on the 21-year-old and the north London club’s possible plans to make an approach for the Brazilian in the winter market.

Son Heung-min will join South Korea at the 2019 AFC Asian Cup and Mauricio Pochettino will also be without his star striker Harry Kane until the start of March due to an injury he picked up against Manchester United.

Due to this, it’s claimed the Premier League club are probing the market to bring in reinforcements.

This is when the report mentions they could ‘reactivate interest’ in Malcom as Tottenham are considering ‘negotiating the transfer’ of the winger with Barcelona. 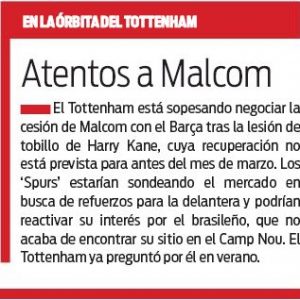 So far, that’s the only information mentioned in Sport’s report and it’s likely Kane’s injury will lead to endless claims around Europe… one of which may turn out to be true.