The Portuguese media have dragged Tottenham right back into the Bruno Fernandes mess.

In their Friday edition, Record claim Spurs are ‘very close to securing the signing’, after movement on a deal earlier this week.

This has all given Manchester United a kick up the rear to push further themselves, which could be the whole point of linking Tottenham player in the first place.

It’s claimed United have been allowed back in, with Spurs unable to actually go through with the signing yet due to Christian Eriksen. Given that the Denmark international doesn’t look like he’s going anywhere right now, that could kill the whole thing. 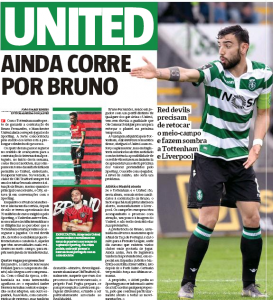 media do. This week has seen a cooling of interest as far as newspapers in Spain are concerned, and even if that changed a transfer would still take a good while to sort out.

So on one hand it’s claimed Tottenham are ‘very close to securing the signing’, and then on the other it’s explained they can’t complete a deal until Eriksen leaves, which hands the advantage to the opposition.