Monday’s edition of Marca covers claims Newcastle United are interested in Gareth Bale, something which has been reported in the English media.

The Spanish newspaper have their own information, and add that they’ve learned there’s some truth behind the claims, and that the plan would be to team the Real Madrid player up with Mauricio Pochettino.

It’s claimed the manager has leaked that he’s already working on a new project, ready for his return to football following his Tottenham exit, and it’s thought the plan relates to the North East club.

Marca make a point of saying Tottenham held a clause in Bale’s Madrid move which meant they had a ‘preferential option’ to sign Bale should another Premier League club move for him.

Real Madrid would have had to tell Spurs when any offer was made, and they’d then have 72 hours to presumably match it. However, it’s stated that expired on June 30th 2019, so now there’s no way for Tottenham to get ahead of any other interest. 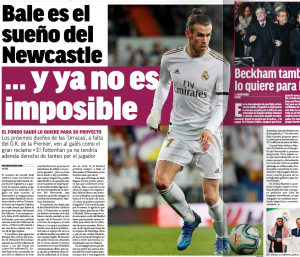 Jose Mourinho has never made a secret of his admiration for the player, and wanted him at Manchester United. Should he feel the same now for Spurs then he’d have no head-start.

Given how stubborn Bale has been over his future decisions, it’s unlikely that’d make a difference, and he’ll either stay where he is or join the specific club he wants.