Despite having left Juventus and since taken over as Tottenham’s director of football, Fabio Paratici continues to be in the news in Italy for his role at the Serie A side.

The Turin club are currently under investigation regarding a number of transfers they completed, with many of those believed to have been manipulated to show far more capital gain than they actually received, thus lying about their actual bank balance.

An example of that was the Miralem Pjanić-Arthur swap between Barcelona and Juventus, which Paratici oversaw, alongside the failed attempt to sign Luis Suárez.

That last deal saw the transfer aborted after accusations came out that the Uruguayan had cheated his way into getting an Italian citizenship, and La Verità in Italy have a whole article looking at the situation.

The newspaper write that, ‘according to some rumours, the Turin Public Prosecutor’s Office would have asked its colleagues in Perugia for a copy of the wiretaps concerning the former Juventus director Fabio Paratici’.

He’s ‘considered the “mind” (perhaps this term is excessive…) of the intertwining of capital gains that “flooded” the administrative situation of Juventus’ and was, before this reported request from the Turin prosecutors, already being looked at for a ‘role of prime importance in the investigation into the fake “Italian exam” taken by the centre-forward Luis Suárez at the University for foreigners of Perugia’ to get him an Italian citizenship to make it easier for them to register him.

It’s stated that ‘on that occasion, and for a long time’, the phone of the current Tottenham director of football, ‘had been under control, revealing his conversations on the subject with the Juventus lawyer and with the then-minister of transport and infrastructures Paolo De Micheli, who intervened and put pressure on the Ministry of Interior’. 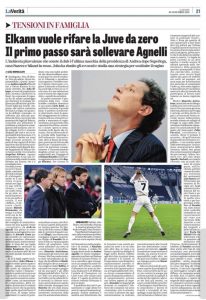 This request comes because ‘evidently, Paratici’s phone also contained other types of conversations, not pertinent to that investigation, and now the Turin prosecutors want to see if there are – as is likely – also useful elements to integrate the investigation in progress’, meaning the one about the dodgy capital gains.

We’ll have to wait and see what comes of all this, but it’s clear the Tottenham chief is currently being looked at, which isn’t a great look.

Whether anything happens and punishments are handed out, however, is a whole different matter altogether.