The Sofiane Boufal transfer story is hotting up, and a queue is starting to form for the Moroccan winger now that his knee is on the mend.

Injured against Lorient in the 26th minute on their artificial pitch, Boufal went on to miss the last two games of the Ligue 1 season, and has spent the transfer window getting back to full fitness following an operation.

France Football on Tuesday report Watford having made an unsuccessful €15m bid for the forward, while Chelsea, Tottenham and Valencia have also expressed an interest. 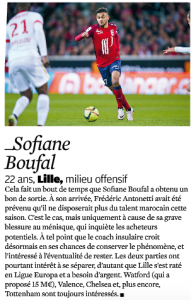 Sport Witness can confirm the bid has been placed for Walter Mazzarri’s side for Boufal.

As for the other three clubs, we understand their interest is ‘strong’ but no official moves have been made yet.

However, taking into account the fact we are in the last week or so of the transfer window, and clubs will be looking for last minute purchases and sales (Lille are in desperate need of money), we fully expect this saga to speed up considerably in the next few days.

Whether it is Watford upping their bid or one of the other three making a move, we’ll have to see.