Tottenham have some experience of signing players from the Eredivisie, with more success than failure in recent seasons.

The next man who could be making the move from the Netherlands to North London is Steven Bergwijn.

Monday’s edition of De Telegraaf covers interest in the PSV player, who they say is currently on a ‘farewell tour’ of Dutch clubs, with a summer transfer looking increasingly likely.

Tottenham are one of the clubs named and it’s explained that Spurs are ‘charmed’ by the player.

Bergwijn has eleven goals and twelve assists this season in 24 Eredivisie matches for PSV, and has been Man of the Match in his past two performances. 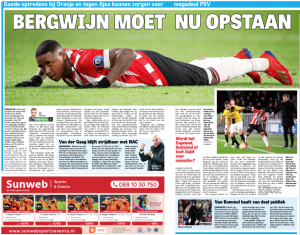 He’s versatile and has played almost equally on the left and right, with a few performances down the middle, in an attacking midfielder role, also thrown in.

At 21 years of age there’s plenty of potential for the future, and that may also attract Tottenham.

Liverpool, Manchester United, Bayern Munich, Borussia Dortmund and Inter Milan are all said to be keen.