Spanish newspaper AS carry a small article on Tuesday regarding interest in Celta Vigo’s Stanislav Lobotka.

It’s believed Napoli will soon be the ‘main candidate’ in the ‘auction’ for the midfielder, because it’s expected Jorginho is off to Manchester City.

Whilst Jorginho’s agent has made it clear repeatedly that the player very much wants the move, a deal has yet to be agreed with Pep Guardiola’s side.

Also ‘in the bidding’ are Tottenham Hotspur, according to the claims, but AS don’t share any further information on that.

It’s a rumour which has been simmering without really getting to boiling point, and it seems to be one that Lobotka himself likes. On a search to see what else is being said on Spurs interest, we landed upon an article from Fichajes who says the Slovakian has sent a ‘wink’ to Tottenham. 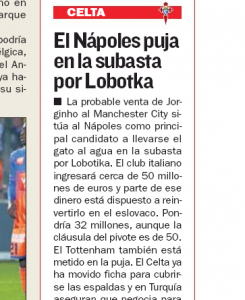 Lobotka has shared a an article on Facebook linking him with Spurs.

We’ve checked it out and a page stating to be the footballer’s has indeed done that.

Playing in a central midfield role for Celta last season, Lobotka made 38 appearances in La Liga. AS believe Napoli would be willing to offer €32m, and the player has a release clause of €50m.