On December 13th, we carried a report from Mundo Deportivo, who claimed Mauricio Pochettino has given the nod to Tottenham Hotspur to push for Adrien Rabiot’s signing.

The Paris Saint-Germian midfielder’s contract will expire in 2019 and has so far decided against signing a new deal and the same publication claims the club are evaluating the possibility of selling him in January.

It’s reported the north London are one of those are ‘attentive’ to the Frenchman’s situation at Parc des Princes as his relationship with the Ligue 1 winners has been ‘stormy’ for a long time.

Mundo mentions the ‘divorce’ between the player and his employer is no longer a secret as everyone is aware of it in Paris and he’ll be able to sign a pre-contract agreement with clubs outside his country from January 1st.

Barcelona are another club who have long been interested in the 23-year-old and Friday’s edition of the Catalan newspaper claims he has his heart set on making a switch to the Camp Nou. But then Catalan newspaper always believe that. 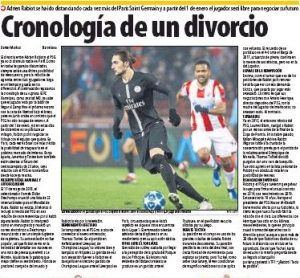 This, coupled with his wage demands, could be a hindrance for Spurs in securing Rabiot’s services as L’Equipe earlier reported he is asking for €10m per year, something Tottenham are unlikely to meet.