There’s something unusual going on in this summer window at Sporting, they’re yet to make a big sale.

The Lions are used to negotiating their talents away with European giants, and even after winning the league title with a promising young squad last season, they haven’t got involved in any flashy departure yet.

So the local media starts wondering if there’ll be any transfer that’ll have a big impact on the club’s bank account, and that’s where Tottenham Hotspur’s chase for João Palhinha is once again recalled.

There are a few outlets talking about this today. One of them is A Bola, who says the midfielder is getting a new contract if he isn’t sold this summer. 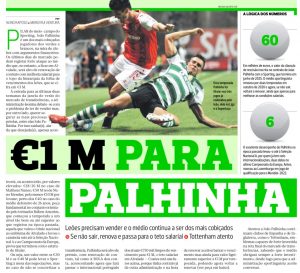 The newspaper writes that Tottenham are ‘attentive’, as they’re one of the clubs who are capable of making big investments at the end of the transfer window.

Sporting recently protected Palhinha with a release clause of €60m, and would now accept to negotiate his sale for between €30m and €40m. In case those numbers aren’t put on the table, then they’re giving him a 25% pay rise.

Tottenham’s interest in the 26-year-old is also highlighted by the likes of Correio da Manhã and Record, with both pointing out that Wolverhampton Wanderers had been chasing the player at one point as well. The two outlets say Sporting demand €40m for the sale, and don’t seem to have any big signs that Spurs are close to offering that amount yet.