Home Europe Tottenham have ‘asked the most’ about signing player, transfer is now on...
SHARE

Monday’s edition of AS very much talked up Dani Ceballos being close to a transfer to Tottenham Hotspur.

It was once again claimed that Spurs have agreed to the condition of a single year loan, and that Mauricio Pochettino has convinced the midfielder he’d have a meaningful role should he move to the Premier League club for a season.

Ceballos is due to join Real Madrid’s preseason tour on July 22nd, and AS said the player would prefer everything to be sorted out before then.

Monday’s Marca has things a bit differently. They say Tottenham, along with AC Milan, have ‘asked the most’ about signing the 23 year old, but a transfer doesn’t seem as certain now as it did some weeks ago.

That’s because Real Madrid have been looking in the market for a replacement and haven’t come up with anything suitable. 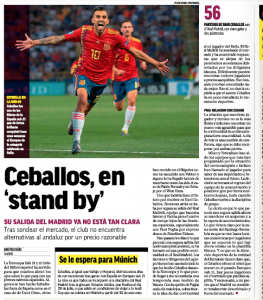 The player’s good performance at the Euro U21 championship has been noted at Madrid, and also by Zinedine Zidane, so the possibility of a stay remains. On top of that, the signing of Paul Pogba is looking increasingly difficult, leaving more room in the squad.

Given Ceballos has made it very clear he wants to play 40 games next season, this could all be heading for disagreement.

The transfer is now on ‘standby’.