Fanatik claim Besiktas are demanding €20m for their star midfielder Oguzhan Ozyakup, who has been linked with moves to Arsenal, Tottenham Hotspur and Roma.

It’s been reported Besiktas president Fikret Orman has rejected a €12m bid from Roma after making it clear Oguzhan will only be allowed to leave for a fee of around €20m.

Like Roma, Arsenal and Tottenham are also allegedly prepared to pay €12m for the Turkish midfielder. It’s been widely reported both 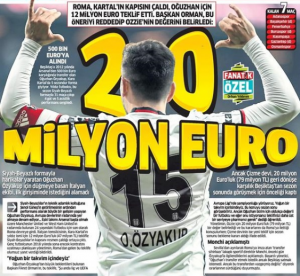 in the Turkish and English press Tottenham manager Mauricio Pochettino is a big fan of the Turkish international.

We covered claims around a week ago which said a €12m offer from Tottenham was expected.

Ozyakup is under contract at Besiktas until 2018 and it’s also been reported in Turkish media Besiktas are keen to extend his contract contract.

As we’ve pointed out previously, the claimed interest of Tottenham, and others, is rather useful for Ozyakup in transfer negotiations, and it would be a surprise if Pochettino is as keen as it’s claimed.