Home Premier League Arsenal Tottenham and Arsenal managers both speak out against ‘The Best’, Pochettino and...
SHARE

Lionel Messi was never going to win The Best award, he wasn’t in the final three. Therefore, it was no surprise when Luka Modric was named the winner, with Cristiano Ronaldo and Mohamed Salah following him.

Despite this, it’s not gone down well in the Catalan media, which is even less of a surprise.

The front page of Tuesday’s edition of Sport has quotes from various people including Mauricio Pochettino and Unai Emery.

Tottenham’s manager is quoted as saying about Messi not winning the award: “For me he’s No. 1, he’s a gift for football and he should have won.”

On the same topic, Arsenal’s boss reportedly said: “We all know that Messi is the best even though we have to share the cake.” 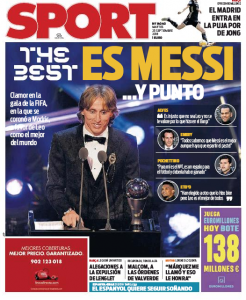 Inside the Catalan newspaper, Pochettino is further quoted as saying: “Leo is number one, a gift for the eyes and for football.”

And Emery: “We all know that he is the best and that he could be ‘The Best’ every year.”

It’s a further annoyance for Sport that a Real Madrid player won the award, but they’re probably glad it wasn’t Cristiano Ronaldo, even if the Portuguese star has now moved to Juventus.