Tottenham Hotspur ‘have some advantage’ against the likes of Newcastle United and West Ham United in their chase for a summer target, according to claims from Portugal today.

We’re talking about Benfica striker Darwin Nunez, who despite being strongly linked to Newcastle and West Ham since January, is likelier to go elsewhere.

It’s Record who features a piece on the striker today, and when speaking of potential destinations for him, they explain that clubs who are close to qualifying for the Champions League, such as Tottenham, have more chances of landing him than the likes of Newcastle and West Ham.

The newspaper expects a big battle for Darwin in the summer, with Benfica, who have him protected under a €150m release clause, willing to negotiate him for at least €80m. 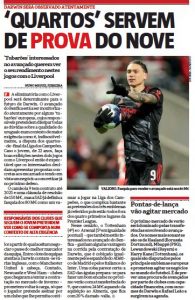 It’s recalled that Manchester United continues to be ‘at the head of the race’, while Newcastle and West Ham promise to be ‘back in charge’ following their January interest. The problem is that all those three are unlikely to be in the Champions League next season.

Darwin, meanwhile, is having a good chance to prove himself in Europe tonight, with Benfica playing the first leg of the quarter-finals against Liverpool.

The Eagles are said to be preparing to make big cash with his sale, and as Tottenham emerge as an interesting option, they now could have an ace up their sleeve for the signing. Especially in case Harry Kane does leave the club this summer and they need a centre-forward to replace him.